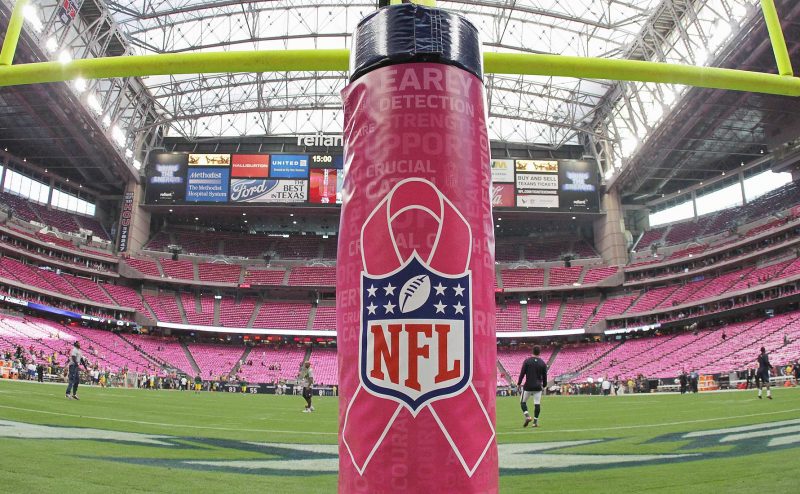 At what point does awareness crossover to actual cash in the coffers in the non-profit world. October is National Breast Cancer Awareness Month and the NFL has donned all manners of pink from shoes, to sweatbands. It is impossible to watch any NFL game and not be completely pinkwashed. But what does all the pink actually do and who is benefiting from the awareness. Can you really put a value on awareness anyway? A lot of non-profits hide behind “awareness” to justify reckless spending. But if you follow the money, you can see the motivation behind the NFL’s pinkwashing.

Head over to NFLshop.com and you will see 839 items that are driving the motivation behind why the NFL is pushing the pink agenda. They claim “100% of the NFL’s proceeds from Pink product sales go to the American Cancer Society.” With products ranging from authentic game balls for $300 a piece to stickers for $2 all emblazoned with the pink ribbon.

With 100% of proceeds going to American Cancer Society, nearly 900 products to choose from and running this campaign for 5+ years, the NFL has undoubtedly donated a boat load of money to the ACS. From their pink website …

Since 2009, the first year of the NFL’s “A Crucial Catch” campaign, the NFL’s work has raised approximately $7 million for the American Cancer Society, with the majority of the contribution coming from the sale of Pink items at retail and via the NFL Auction website.

But when you start to look into the numbers, according to Darren Rovell of ESPN, that out of every $100 spent on pink memorabilia, approximately $11.25 goes to the ACS. The remaining $88.75 is divided up by the company that makes the merchandise (37.5 percent) and the company that sells the merchandise (50.0 percent), which is often the NFL. For every $100 spent on pink merchandise from the NFL, roughly $88 goes to the NFL and the remaining $12 goes to the ACS. Its easy to see why the NFL has only raised $7M for the ACS over the last 5 years.

Pinkwashing is a cash cow for the NFL. In addition to the growth in women watching football and making apparel specific to women, its easy to follow the NFL’s motivation. But is the NFL solely to blame? Lets look into what the ACS is doing.

In 2012 the American Cancer Society raised $934 million and spent $943 million. John R. Seffrin, CEO of the American Cancer Society, received $2,401,112 salary/compensation from the charity for the 2009-2010 fiscal year. This is the second most money given by any charity to the head of that charity, according to Charity Watch. The money included $1.5 million in a retention benefit approved in 2001, “to preserve management stability.” Mr. Seffrin’s compensation for the fiscal year ending August 31, 2012 was $832,355. On CharityNavigator.org the ACS gets a rating of 75.96, which gives them 2 out of 4 stars. This is not a good rating by any stretch of the imagination.

In comparison, the NFL Commissioner Roger Goodell was paid $44.2 million in 2012, making him among the best-paid executives in the country. That is not a typo. That is merely a drop in the bucket to the roughly $10 billion that the league generates annually.

Which is worse, a non-profit organization making money hand over fist while exploiting another non-profit, or a non-profit with a spending/awareness problem. So, at what point can you put a price on awareness. When the NFL and the ACS continue to exploit each other for the all mighty dollar, there seems to be no low, low enough. The next time you want to support pink, think twice about buying anything NFL related.