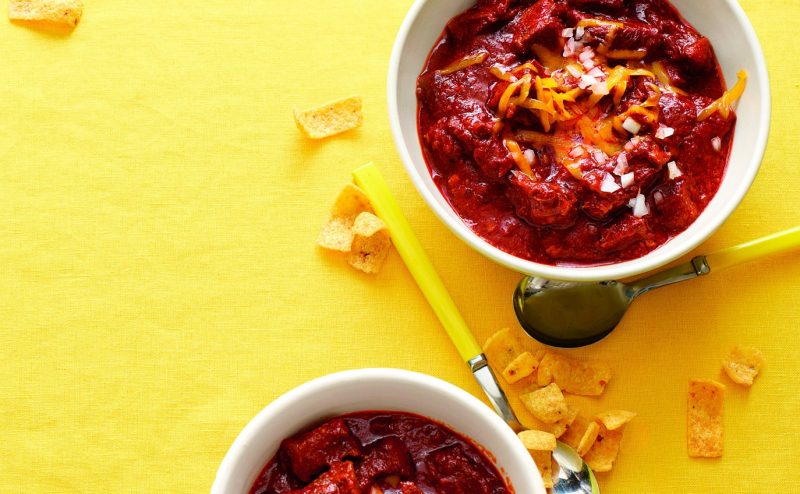 There’s a Chili in the Air

As Fall finally gains the upper hand on Summer and cooler temperatures prevail my culinary tastes change seasons as well. Cool air triggers a hunger for things like hearty soups, full-bodied beers, and chili. I should point here that in the strictest traditions of Texas that chili has no beans, period. If your chili has beans then the remainder of this piece should be read like a sermon from a Baptist preacher saving the souls of heathens in an unholy land. No beans. Repent thou sinner.

Thinking back there are distinct recipes of chili that have spiced my time on this Earth. One is my brother Thomas’. The details of this bowl are unknown to me aside from his main ingredient: venison. His chili balances all the factors; spice, meat, and consistency perfectly. The only time I get served this delight is on hunting trips that require an overnight camp. It’s understood in the division of responsibilities that he brings the chili and I bring the appetite. The first taste after a full day of hunting triggers memories of other hunts we’ve shared this dish on. Right now I’m reminded of a quail hunt in West Texas last January. A cold front blew in with sustained gale force winds and bone chilling temperatures in the mid-teens. West Texas by definition is treeless (mesquites don’t count). In the middle of the night I had to relocate my tent on the downwind side of an outhouse for protection. The chili on that hunt seemed to possess the ability to warm one from within. It was as essential to survival as long johns but much more tasty.

Then there are my own pots of chili creations that seem more like an improvisational jazz piece than a strictly orchestrated symphony. I don’t follow recipes but see them more as recommendations. Some notes on ingredients. Chili “kits” are acceptable. Ground bacon is an excellent addition. Use beer in place of water. Use a real beer like Shiner, Dos Equis, or Lonestar. For heaven’s sake don’t use Bud Light or Keystone. Sprinkle a liberal amount of your favorite shredded cheese on top. Hickory smoked cheddar is an excellent choice. Also, trust me on this one, stir in a big spoonful of sweet, pickle relish. Don’t knock it til you try it. And it goes without saying, NO BEANS! Serve with more beer.

I was enjoying just such a concoction one June evening in Montana (still plenty cold enough!) when my good friends’ wife called. Dave was missing. I put my bowl down to go look for him but had no luck. Hours later I returned home and warmed up my chili. It was while finishing this bowl that I heard the sirens of emergency vehicles racing through town. I knew. R.I.P. Dave.

How do I transition from that? Let’s see, chili, Montana, Montana has wolves, ah, yes: Wolf Brand Chili! Wolf Brand Chili (WBC) is a store-bought, canned (I can hear people grumbling) chili and it’s a staple in every pantry in Texas. The history of the great chili needs to be shared.

WBC dates back to 1895 and finds its origins in a cook pot on a ranch outside of Corsicana, TX. Here the rancher Limon Davis ordered his Mexican cook to prepare large quantities to feed the cowboys. The leftovers Davis would haul into Corsicana and sell outside of a saloon for a nickel a bowl.

Davis would eventually establish a meat market in town and sell his chili chilled in a “brick form.” He then purchased rudimentary canning machinery. On his label he put a picture of his pet wolf, Kaiser Bill. The wolf got his name from Kaiser Wilhelm II the Emperor of Germany defeated during World War I. Wolf Brand Chili was born.

In time, Davis would sell his interest in the company to local businessmen who would take the company to the next level with a clever marketing plan. They invested in several Ford Model T’s for the sales/delivery teams. The back of the vehicle was built with a giant, horizontally resting can of WBC. The back was a caged door to allow a view within. Inside rode a live wolf in each vehicle.

The enterprise saw continued success and growth and decided to expand in the markets of Oklahoma. At the time there existed a certain prejudice Texans held against the people of Oklahoma. Texans didn’t hold their northern neighbors in the highest of intellectual regards. For this reason, the picture on the label of Kaiser Bill was reduced in size and moved to the back of the can. The company was afraid the Okies would think the can was filled with wolf meat. To this day, old Kaiser Bill stands on the back of every can of Wolf Brand Chili.